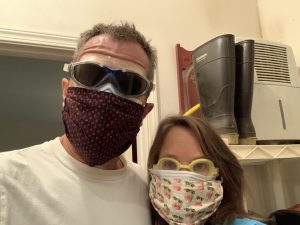 Gail and I went for a walk in the smoke yesterday. This is how we dressed…. Well…. we didn’t actually wear the goggles. How do you deal with the smoke. We’ve been keeping our house, windows and everything closed up. We only use one door going in and out of the house all day and that is downstairs in the basement, through the garage, and out. That keeps us a little less filled with smoke.

The Bible speaks a lot about smoke. It is often fearful.

Exodus 20:18–19 (NIV) 18 When the people saw the thunder and lightning and heard the trumpet and saw the mountain in smoke, they trembled with fear. They stayed at a distance 19 and said to Moses, “Speak to us yourself and we will listen. But do not have God speak to us or we will die.”

But there are times in scripture where smoke is a good thing:

Leviticus 16:13 (NIV) 13 He is to put the incense on the fire before the LORD, and the smoke of the incense will conceal the atonement cover above the tablets of the covenant law, so that he will not die.

Revelation 15:8 (NIV) 8 And the temple was filled with smoke from the glory of God and from his power….

No, I’m trying to say don’t worry about the smoke outside today. I have three families who are friends who have been displaced by the current evacuations in Oregon and SW Washington. This is a strange time we live in. It’s a strange year.

But what I am coming to the conclusion of is that God is still in charge. He’s still on the throne. I don’t have to stress about all the signs of the times that are in front of us. I can rest in submission to God and let him have complete control of my life. You can too! When we see God and His smoke, we can rest assured that God delights in forgiveness, delights in grace and mercy. He loves us.

Psalm 145:8–9 (ESV) 8  The LORD is gracious and merciful,
slow to anger and abounding in steadfast love.
9  The LORD is good to all,
and his mercy is over all that he has made.

1 John 4:7 (NIV) 7 Dear friends, let us love one another, for love comes from God. Everyone who loves has been born of God and knows God.

Go in God’s grace today. And be careful of the smoke (in Oregon and Washington – but not of God’s smoke).